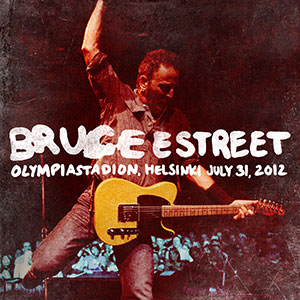 This practice of listening in on rehearsals would continue for all of Springsteen's subsequent tours. Springsteen then held two public rehearsal concerts in Convention Hall, a practice that would also continue for tours to come.

Springsteen opted Dont Do It - The Band - The Capitol Albums 1968-1977 start the Reunion Tour in Europe, perhaps to get the show in top shape before coming home to greater attention.

The Europe leg would run through the end of June, finishing in Osloand encompass 37 shows in all, featuring a mixture of arenas and stadiums and often playing two nights in a location. Two weeks later the second leg commenced back in the United States, and took place solely in arenas. More multi-night stands followed, as the tour concentrated on Springsteen hot spots such as PhiladelphiaBostonChicago, and Los Angeles.

After 52 shows, the leg finished in Minneapolis in the end of November. A three-month winter break ensued. The third leg started up in late February with a show at Penn State University.

This leg focused on mostly single-night stands in areas that hadn't been reached on the previous leg, including a couple of dates in Canada, and again took place in arenas. The E Street Band's sound changed with this tour. Originally different because of its inclusion Aint No Party - Various - Wild 94.9 Workout At Noon Vol.

2 two keyboard instruments and a saxophone, it was now more guitar-oriented, as different-era second guitarists Steven Van Zandt and Nils Lofgren were both included in the line-up, and as wife Patti Scialfa 's greater up-front visibility added a fourth guitar.

The ability of the sound system to keep the instrumental mix clear varied from venue to venue and night to night. Set lists were dynamic throughout the tour. Although little known, "My Love" contained all the classic E Street Band elements, led by Danny Federici 's trademark electronic glockenspiel sound.

Later many other songs served the opener role as well, often equally unknown but less accessible ones that gave the audience pause at the start. The second slot however was usually given to " Prove It All Shes The One - Bruce Springsteen & The E Street Band* - Tower Theater " or "The Promised Land", s classics that would pull the audience fully into the show, followed by "Two Hearts", emphasizing the bond between Springsteen and sidekick Van Zandt.

Following those numbers, anything might appear. Midway through the regular set, a fixed series of five songs always appeared: a loud, full-band "Youngstown", with a fiery guitar solo from Nils Lofgren ; a loud, three-guitars-distorting "Murder Inc. It was in "Tenth Avenue Freeze-Out" that the show's theme began to emerge. From there the show would drop back into a serious mode, usually featuring a soft band rendition of the gloomy " The Ghost of Tom Joad " followed by a s epic of loss rotated amongst " Backstreets ", " Jungleland ", and " Racing in the Street ".

But then the second piece of the theme came, with the Philadelphia 1975 closer " Light of Day ". Now Springsteen was the backwoods preacher again, stretching out the song and in the middle giving a long sermon on what kind of salvation he was offering. First would be some local-site-specific glorifying Shes The One - Bruce Springsteen & The E Street Band* - Tower Theater taunting, and then he would intone in time to band beats:.

This "Ministry Shes The One - Bruce Springsteen & The E Street Band* - Tower Theater Rock and Roll" litany became the long catchphrase of the tour, and t-shirts were printed up with these words on the back.

Encores began with fan favorites such as " Born to Run " and " Thunder Road "; Springsteen would make increased use of turning the house lights on during some such songs, to increase the communal feeling of the concert.

Lights went back down, as the next-to-last song of the show typically began the third part of the concert's theme. This was a rendering of "If I Should Fall Behind", originally recorded during the E Street Band's dissolved period, but now cast as a slowly played vow of togetherness: Springsteen, Van Zandt, Lofgren, Scialfa, and Clemons would each take turns singing a verse, promising to wait for each other.

Last came "Land of Hope and Dreams", the one newly written song to be featured on most Shes The One - Bruce Springsteen & The E Street Band* - Tower Theater the tour. In Preacher Bruce's take, all are welcome on the train — "saints and sinners", "losers and winners", "whores and gamblers" — you just get on board.

Stretched to eight or more minutes, with several false endings, 'Lohad' represented the culmination of the show's message of rock and roll revival. Springsteen celebrated his 50th birthday with a sold-out show on September 24, at Philadelphia's Wachovia Spectrumopening the show with praise for his strong Philadelphia fan base, then playing a voice-mail recording that a friend of his mother left on her answering machine, singing to him " The Big 50 ".

Springsteen then quoted W. Fieldssaying that "All things being equal, Three, Two, Square One, Go - Fire In The Attic - Ill Beat You, City! rather be in Philadelphia", Shes The One - Bruce Springsteen & The E Street Band* - Tower Theater broke into his early favorite " Growin' Up ".

During the tour's third leg inSpringsteen began performing some additional newly written songs, including a couple co-written by Joe Grushecky of Iron City Houserockers fame. But the new song that gained by far the most attention was " American Skin 41 Shots ". Finally the Garden shows and the tour concluded with the sole performance of the temporary-reunion "Blood Brothers", augmented by an added verse; in the words of writer Robert Santelli, this was "the only song that could sum up what he was feeling Some recordings of those shows have been around for years, however one of the most notable bootleg is the Last Tango In Philly that you can listen to below.

Click The Sound Of Goodbye - Level 2.0 - Battle Sight Zer0 to cancel reply. You must be logged in to post a comment. Support Local Music Journalism This website does not rely on Philadelphia 1975 funding, because The Key is a nonprofit public service dedicated to supporting the local music that you love with Touch Of Grey - Grateful Dead* - In The Dark reporting.

Below, click through to YouTube to listen to the show from December 30th, Night Spirit In The Night Its My Life Born To Run Its Gonna Work Out Fine Saint In The City Backstreets Mountain Of Love Jungleland